MC Ranch is one of the most successful and progressive breeders of Santa Gertrudis cattle.  Since 1992 MC Ranch has bred and exhibited as many champions as any breeder competing today.  MC Ranch can provide you with quality cattle whether it be the highest quality show prospects or pasture proven genetics that will put you one step closer to your Santa Gertrudis or commercial goals. 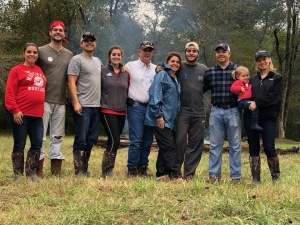 While proud of all their accomplishment in the show ring, MC Ranch’s current focus is on the integration of NuGen genetics into their herd. MC Ranch is partnered in the project with Wendt Ranches and Goodin Farms. The NuGen Partners have successfully reproduced the (3/8 x 5/8) foundation animal, using the best available genetics from the Brahman and Shorthorn breeds. The NuGen foundation animals are purebred Santa Gertrudis equivalent to SGBI foundation sire “Monkey.” All offspring out of the NuGen foundation animals are eligible for registry with SGBI. NuGen cattle offer Santa Gertrudis breeders the opportunity to benefit from increased hybrid vigor and heterosis. NuGen cattle were developed and continue to exceed the current demands of the beef industry.